12 Meditation rooms inside the "Petals"

In January 1972, the Mother gave to the architect the following documents:

1) Sri Aurobindo’s instructions for the colours of her symbol,
2) a colour chart of her symbol and
3) the list of the Mother’s twelve ‘Virtues’.

The twelve all different colours in three groups:

next group, yellow passing through green towards blue; and

If white is not convenient, the centre may be gold (powder).”

In July 1972, she told him verbally how to match the colours and the Virtues.

The colour light blue for Sincerity and dark blue for Peace.

[1] Note that the Gardens too rotate counter-clockwise and that so do the twin central staircases and twin spiral ramps.

All 12 rooms have the same shape, a flattened sphere (like the Matrimandir itself but smaller).  The insides of the shell of these rooms are painted in different colours: Sincerity is pale blue, Humility and Gratitude have different shades of green, Perseverance is yellow, Aspiration is golden yellow, Receptivity is orange, Courage is red, Generosity is violet and Peace is dark blue.  All the other rooms have colours in between those mentioned above.

So, one sits and concentrates on a particular Virtue while being bathed in the light of the corresponding colour.

So, one sits on a concrete slab clad with white marble, which seems to float inside the flattened sphere.  The rooms are air conditioned and there is an object of concentration at eye level (if one sits on the floor). This object is a translucent oval disc (made of Glass Reinforced Plastic) which is placed in front of a small window through which natural light enters at daytime. At night time electrical light produces a similar effect. An Auroville artist, Shanta, designed some geometrical patterns on these objects of concentration: a different pattern for each room.

What you can do

Introduction to the Integral Yoga of Sri Aurobindo

The Advent of a New World 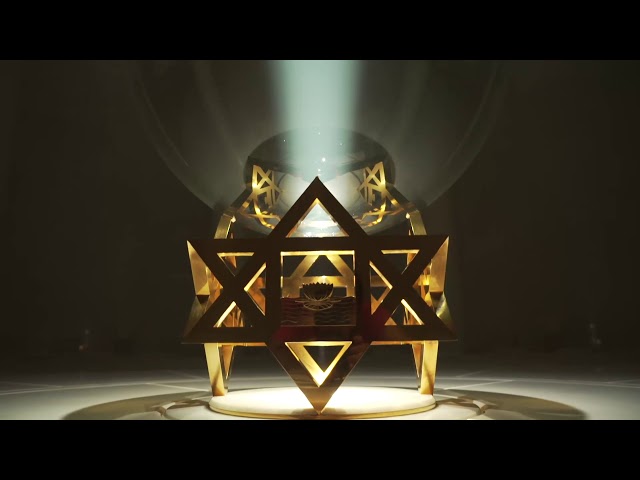 Your First Steps into Auroville: A Quick Guide

Get Collected Works of The Mother

Get Complete Works of Sri Aurobindo

The Auroville Charter: a new vision of power and promise for p...

The Mother - a brief sketch of her life and work

Health and Wellness - Words of Wisdom

Evolution of the galaxy concept of Auroville's masterplan

The Galaxy concept of the city

On Influenza & Epidemics - Words of Wisdom

A Dream: Envisioning an Ideal Society

Yoga of Love - Words of Wisdom

Short video on Sri Aurobindo, The Mother and Auroville

Beyond Religion - Words of Wisdom

Yoga of Knowledge - Words of Wisdom

Marriage and Relationship - Words of Wisdom

Yoga of Work - Words of Wisdom

Matrimandir - Soul of the City

The Mother's symbol in multiple languages

"Matrimandir" - The Treasure of the Flame-Island

Savitri around the world

To be a True Aurovilian: Mother Explains How to Live in the Wo...
Disclaimer Contact Sign in